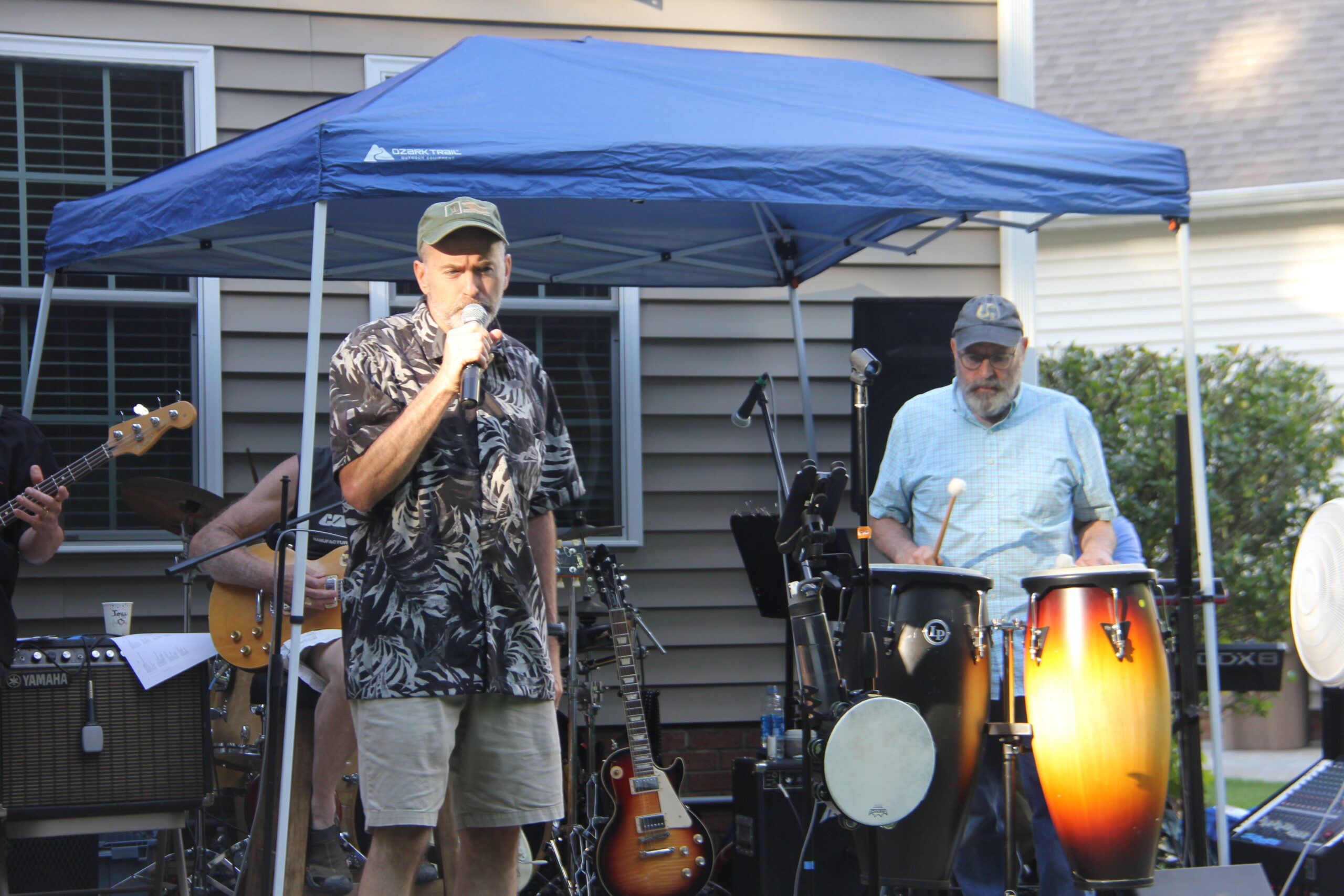 Keyboard player Lance Armstrong (the original!) is a Louisiana native currently living in Clayton.  He played keyboards for three years with the 14-piece swamp pop band, Big River Express.  After moving to NC in 2017, he played with Ray Cross and the Country Diamonds until the pandemic locked everything down.   His favorite groups include 50’s folk such as PP&M, Kingston Trio, etc., 50’s rock such as Chuck Berry, Bill Hailey, etc., 60’s-70’s rock such as Beatles, Stones, Byrds, CSN&Y, Doobies, Dylan, Eagles, Who, Zepplin, etc.), and Prog rock such as ELP, Yes, Tull, Crimson, Moodies, Kansas, Styx, Rush etc., as well as most genres including jazz and classical.  Keyboard influences include Rick Wakeman, Keith Emerson, Keith Jarrett, Greg Rolie, Greg Allman, Geoff Downes, Steve Winwood, and many others.

Lance is a retired computer geek who enjoys time with his wife, Linda.  They love traveling in NC, around the US, and especially the UK, as well as occasional trips back to Louisiana to see their great-granddaughters, Scarlett and Delilah.  In his spare time, Lance enjoys church and community work along with trips to the gym at SRAC.

In the late 90’s he was invited to join an 10 piece R&B band called The Hackensack Men & The Trenton Horns. This began a 20 + year journey into the roots of all great music and a lifelong appreciation of the artists and musicians who created some of the most influential and meaningful music ever recorded.

This eventually led to forming an authentic Rockabilly band, The Vendettas, with longtime friend and collaborator, Jay (Jaybone) Janoski. It was during this period that David honed his skills on the upright bass developing the percussive yet melodic style this is the foundation of the Roots Rock sound.

Today, David continues his journey, using either an electric Fender Jazz bass or an acoustic Upright, applying the lessons learned over the past 3 decades to create melodic, supportive bass lines that are anchored in the pocket and present in the groove. 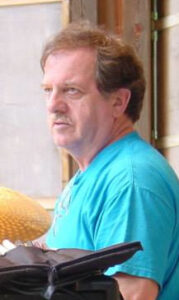 Drummer Chuck LaPorte hails from a small town in Vermont, Brandon, where he lived for 26 years and shared musical experiences with Chris Whitehorne, among other things growing up. Now retired and living with his wife, Claudia, at Lake Royale, he has lots of playing experience: from Vermont with Chris and other garage-type bands, to Virginia featuring a special 10 years with the Back Alley Band, sharing the stage with Harry Daley (who played with Jimmy Buffett for 8 years and co-wrote songs, “Volcano” and others), and lastly with a group of accomplished friends in the Movin’ On Band. His influences include his two mentors – Uncle Billy Maloney (a music teacher in Massachusetts) and notably Mr. Napoleon Ianni (his teacher from 2nd grade until he graduated) – along with Steve Smith (Journey), Charley Watts (Rolling Stones), Richie Hayward (Little Feat), Steve Gadd (Steely Dan), Stewart Copeland (The Police), John Bonham (Led Zeppelin), Ringo Starr (The Beatles) and Dave Garibaldi (Tower of Power).

Chuck has over 40 years of sporting goods experience, runs a baseball / softball glove restoration business, and has trained and coached soccer players since 1985 – 25 of those years coaching high school programs. He’s especially excited to be reconnecting with Chris Whitehorne after nearly 50 years (fate has its ways)! He has three children, seven grandchildren, and two great grandchildren and loves to fish, play music, camp (new camper to use), play golf, coach soccer, and watch most sports.

Guitarist John Oswald is 69 years old, grew up in the Raleigh area and graduated from J.O Sanderson High School in 1971. After working as a carpenter for several years he attended and graduated from North Carolina State University with a BS in Chemistry. He worked in that field for 31 years until retirement in 2020.

He began playing guitar at age 15 and played in numerous rock-and-roll bands in the Raleigh area for many years. Along the way he also became adept at drums and bass guitar. He began playing in his church band around the year 2000 and later joined up with Lorraine Jordan and others, most notably in the Jordan River Band, playing at Christian festivals, events and functions in North Carolina and surrounding states. He decided to return to playing secular music this year and went in search of individuals with similar taste and musical goals, which he believes he has found with DNR.

His guitar influences include Carlos Santana, David Gilmore (Pink Floyd) and Martin Barre. Some of his favorites are Steely Dan, the Moody Blues, Jethro Tull, Yes, Saga, Kansas, Bela Fleck and Styx, among many others. His musical taste revolves around progressive rock and jazz fusion, but he also gravitates toward Southern rock and anything guitar-driven with really good drumming.

John is now retired and lives in his lake house at Kerr Lake just inside North Carolina with his wife, Taryn, and three dogs. He enjoys boating, fishing, woodworking and just plain relaxing.

Vocalist Mark Turner grew up all over the South and has called Raleigh home since 1992. He mainly sang in the shower (or in the server room!) before the pandemic inspired him take singing more seriously. At home as a kid the family stereo was always on, playing Elvis, The Eagles, The Beatles, CCR, Moody Blues, Doobie Brothers, Bee Gees, Willie & Waylon, Chicago and other artists. As a teen he started his own collection of music like The Police, Van Halen, ZZ Top, Led Zeppelin, Aerosmith, Def Leppard, INXS, R.E.M., Tom Petty, Elvis Costello, Robert Plant, Duran Duran, The B-52s, The Cult, Psychedelic Furs, The Clash, The Smiths, Catherine Wheel, Cake, and Widespread Panic among others. His vocal range and style is similar to Tom Petty, Don Henley, John Mellencamp, Paul Rodgers, Robert “Kool” Bell, and others. He has a growing love of R&B music and especially loves performing songs that get people moving!

A Navy veteran, Mark works as a computer geek by day. When he’s not singing or maintaining servers, he enjoys cycling Raleigh’s greenways; honing his ping-pong, foosball, and pool skills; photography; taking the family to exotic locations (sometimes bringing them back!); geeking out with technology projects; and keeping heavily involved in the community. His wife (Kelly), teen kids (Hallie and Travis), and two dogs have been amazingly tolerant of his constant noisemaking! You can find Mark on most social media as @MarkTurnerNC.

Guitarist Chris Whitehorne is a New England transplant to the Raleigh area since 1992. Imagine coming to a place so rich with musical influence as North Carolina, with modern music of every genre regularly available and with echoes of the ancient musical Gods, from mountains to beaches.

Chris’s musical experience began in early garage bands that played songs from British Invasion vs US bands in the ‘60’s. Dave Clarke 5 was a favorite, and the Animals. Answered by The Young Rascals and the Lovin Spoonful. As innocence gave way to the psychedelic era we had Jefferson Airplane and Procol Harem. Then it all broke loose, folk/ country from the west coast, jazz/blues in the northeast, beach music all down the Atlantic south. In the Midwest, Mitch Ryder’s soul began to spread and funk from The Pack(Grand Funk). As musicians began to mingle & evolve, the progressive bands were born. Pink Floyd took off, and King Crimson. Here in the US, the Allman Brothers brought home the holy grail of blues/rock to its rightful place in the American South. Chris followed it all, but Southern rock, with Duane, Dickey, Toy and Charlie were all strong influences on the guitar style and rhythm that Chris brings to DNR.

A retired builder, Chris & wife Janna enjoy traveling and spending time with family and friends. Due to the pandemic, RV camping took the place of conventional travel, to the enjoyment of their 2 grandchildren. A chance rekindling of an old friendship with a bandmate from the garage days, Chuck our drummer, and the new friendships with these extraordinary musicians began the idea for DNR. Rock On!